“Pylon was and always will be Vanessa, Randy, Michael, and Curtis.”

2016-10-26: Pylon’s Facebook is active, with news about Pylon Reenactment Society, media mentions, the release of Live, serendipity and more.

2016-02-15: We recently noticed that Vanessa is touring as Pylon Reenactment Society.

Hey, guess what?! Our new DFA release is available today!

It's called "Cover+Remix" and is available as a 2-song 7-inch vinyl single or a 3-song digital download.

The A-sdie is Deerhunter's cover of Cool.

The B-side is Calvinist (Sasha Frere-Jones and Alexis Krauss) remix of Yo-Yo.

Both sides are awesome, we love it and have been waiting a long time for this come out.

Also, DFA says you can go to their Facebook Page to "enter to win one of 4 Pylon prize packs, including CD copies of both of their albums with the new 7-inch." 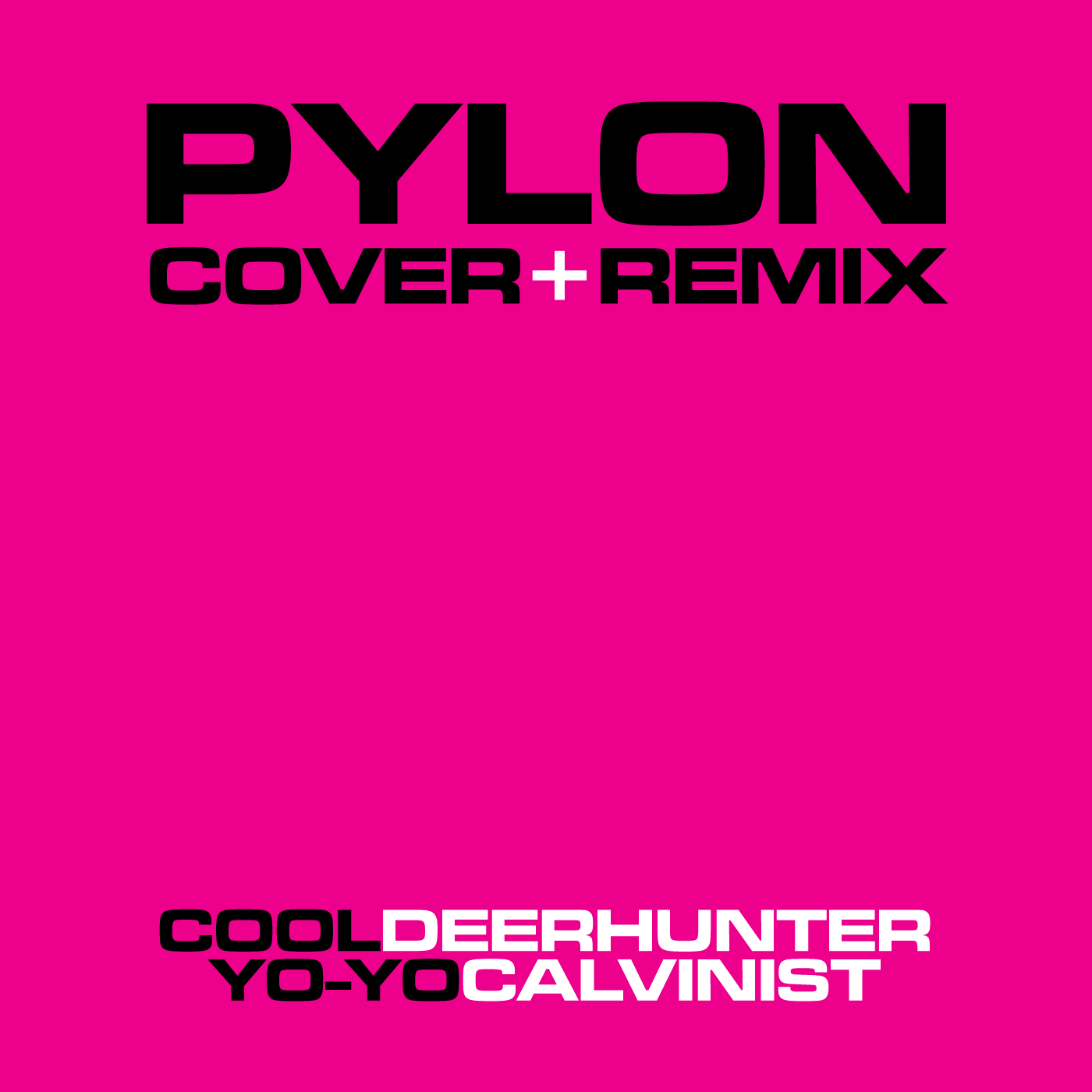 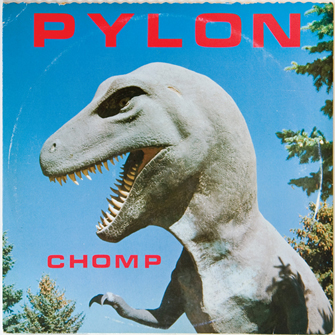 It's out!
Chomp is now available, remastered by Pylon.
On DFA Records on CD + digital. It's up on iTunes now.
Containing 4 additional tracks, dedicated to Randy Bewley.
Links for purchase and other stuff on our website. 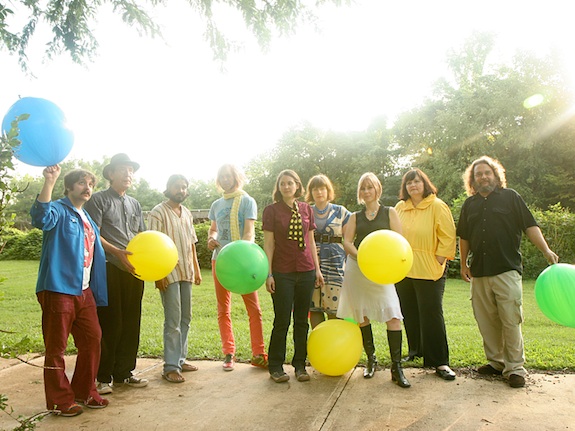 Vanessa Hay of Pylon and Hannah Jones started this band, Supercluster.
One member was Randy Bewley of Pylon.
Their debut CD is out now, entitled Waves.
They have upcoming shows to celebrate the CD release:
October 22 at EARL in Atlanta, October 23 at Little Kings in Athens.
Order the CD at athensmusic.net.
Become a fan of the Supercluster Facebook Page for more info.
Peep their window display at Wuxtry Athens.
The music keeps going on… 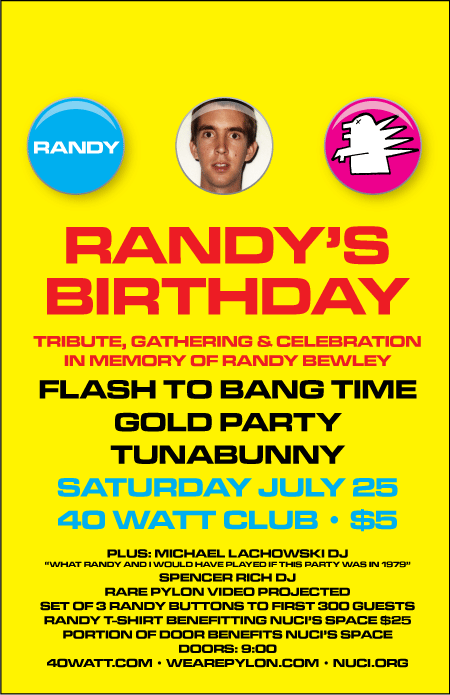 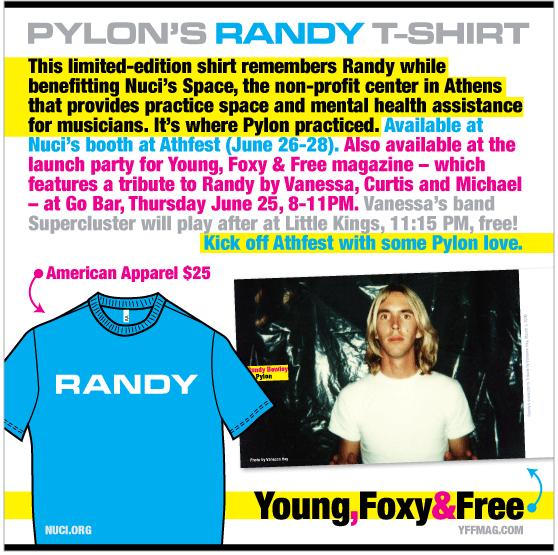 This past Monday evening, Randy Bewley had a heart attack while driving his van on Barber Street in Athens, GA. He was taken to Athens Regional Medical Center. Today, our bandmate and brother passed away at a little before 5 p.m. with his family and friends at his side. He will be missed, even as we celebrate his life and creativity. His guitar sound was as special as he was and always will be. Randy's guitar work defined not only a generation of sound but Randy himself. His visual art, painting and photos, combined with his signature sound formed a loose set of boundaries that helps understand him. His quiet devotion to family and friends will become a benchmark for those he leaves behind.

We did an interview with Rob Trucks at the Village Voice, and he suggested that we give away a song. So for about a week, you can download Cool for free from Pylon, DFA Records and the Village Voice.

While you're there, if you can stand it, there is a long interview by Rob Trucks with Randy and Michael. "Like, you know?"

Pylon has a new Facebook page and is playing in New York on December 15. 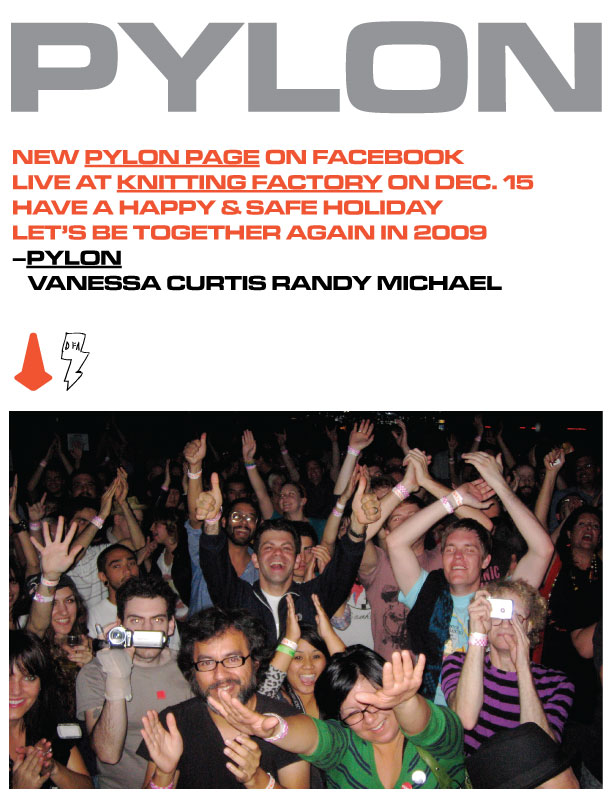 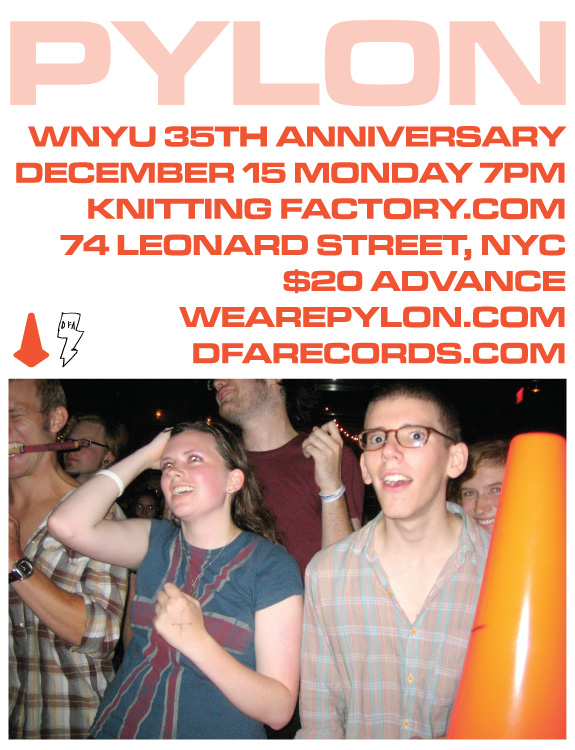 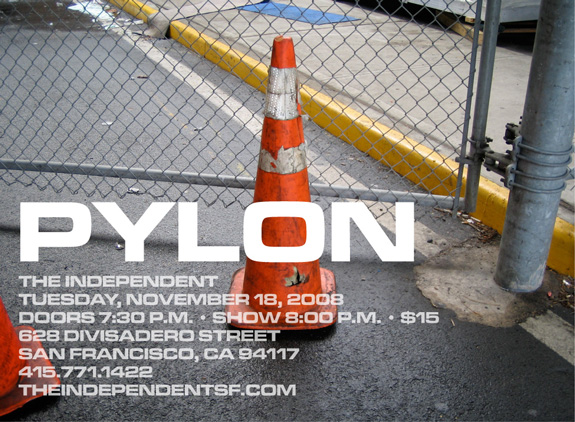 Pylon will headline at The Independent in San Francisco on Tuesday. Our set time is around 9:15. We'll be there with some copies of Gyrate Plus (DFA Records) and t-shirts for sale. Please  spread the word! 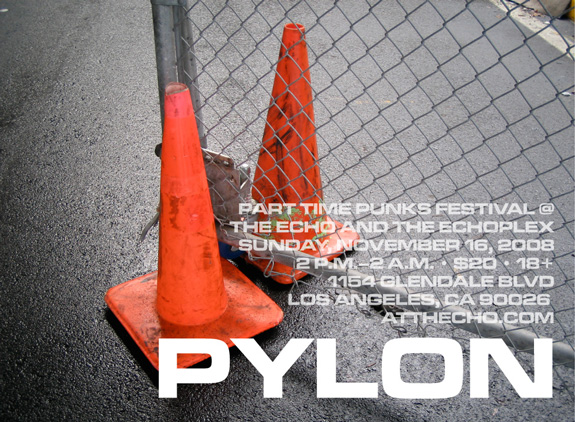 Pylon and A Certain Ratio at the top of the bill of Part Time Punks Festival at Echo in Los Angeles. Here's the lineup and schedule (tentative):

Spread the word! Pylon will be there with some Gyrate Plus CD's (DFA Records) and t-shirts. 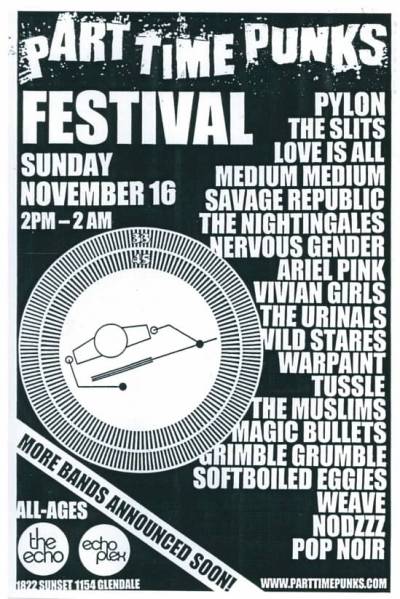 Also in SF on November 18. More details to follow! 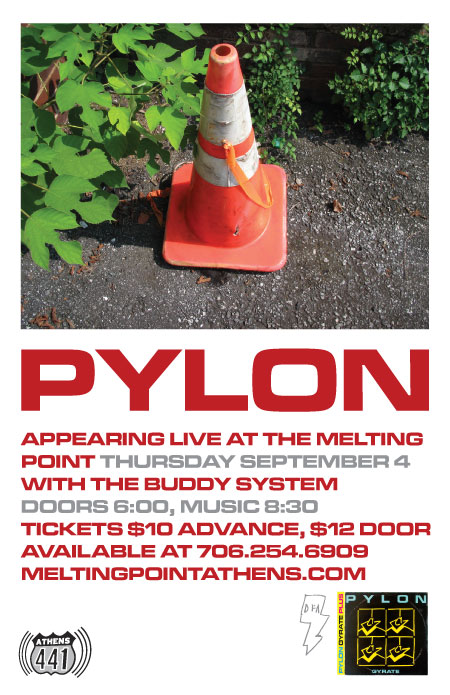 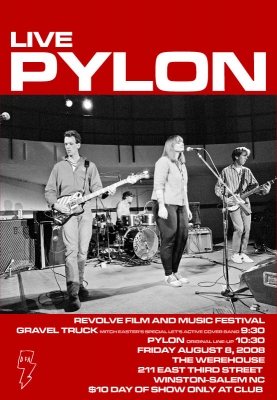 As part of AthFest 2008, the wonderful downtown cinema in Athens -- Cine -- has two offerings on Wednesday, June 18. Both will include Pylon!

For more information, go to http://athenscine.com

Pylon was recorded for the Virtual Lower East Side website at the Mercury Lounge back in November.
If you missed us on our recent tour to promote Gyrate Plus, here's your chance to catch us live. 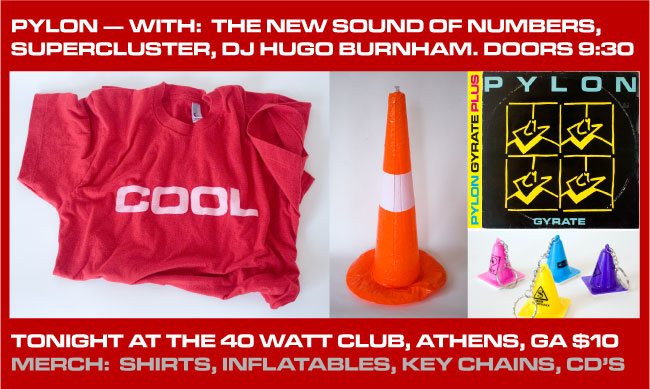 2007-10-23: In the wake of Gyrate Plus's release: Pylon's MySpace has a nice "About" writeup. deadlydesigns.com published photos of the Gyrate Plus release and signing event at Wuxtry Records. Mojo magazine published an homage by Mike Mills in its November 2007 issue. Flagpole published an interview with Michael. The Village Voice published a review.

2007-10-03: it appears that Vanessa's MySpace and Vanessa's Blog are the best sources for Pylon news these days. Recent entries announce a northeast tour and a 2007-11-07 show at the Mercury Lounge in New York City.

On 2007-10-03 [and coincidental to the above note], Pylon announced via email the Mercury Lounge gig and an October 16 release date for the Gyrate reissue.

On 2007-04-03, a cryptic message was sent to the wearepylon mail list. Could Pylon be playing at the "Little Kings" space at Hancock and Hull? Yes! See Pylon's MySpace page friends comments starting Apr 5 2007, Vanessa's version, and the deadlydesigns photo gallery.

On 2007-02-23, Vanessa announced plans to re-release Gyrate through DFA Records. The re-release is "tentatively scheduled" for Fall 2007.

On 2004-08-05, Pylon reunited for a one-shot show in Athens, Georgia, USA. The Day Jobs published a teaser, photos and notes. They report on plans for a two-disc set in the coming year. They also note an upcoming interview and Pylon's website.

On 2004-08-12, Creative Loafing published a brief article about the show, "Pylon rides the M-Train again".

On 2004-08-18, Flagpole published two reports on the reunion show, "It's Alright, Pylon Is Here (Again)", which includes an interview, and "Rocking Is No Problem".

Thanks to the aolnymous person who sent a photo and movie from the scene. They will be posted eventually, along with a silly story about my "reunion experience."

On 2004-12-31, Pylon performed at the 40 Watt Club. Flagpole published a preview article, "Pillar Of The Community". tch3 published a nice photo album.

Was this web page responsible for Pylon's reunion?

(Vanessa responded on 2005-03-15: "Of course you should take credit for taking part in the chain of events that allowed Pylon to re-unite. Thank you so much for your support.")

On 06/17/2002, Vanessa wrote, "There will be an exhibit that opens later this month called Party Out of Bounds in Macon, GA at the Ga Music Hall of Fame. It will run through August. We loaned some stuff to the Georgia Music Hall of Fame as did many other Athens bands."

On 07/23/2001, a friend of Michael's wrote, "...in addition to his work as a DJ and graphic designer, he is now very involoved in creating a techno scene in Athens as well. You can check out his latest stuff and drop him a line at www.candysticker.com."

I wondered what happened to the members of Pylon after the band broke up. Luckily, Vanessa found my Pylon page and we exchanged some email. Vanessa told me this on June 25, 1999:

Vanessa is a registered nurse, the mother of two girls and married to Bob Hay, the former guitarist for the Squalls.

Randy is the father of two boys and teaches art at an elementary school.

Curtis is the father of a boy and a girl and works for TV shows and movies as a carpenter.

Michael has a graphic design agency and DJ's at Athens-area clubs.

None of the members of Pylon is making music.

Who's linkin'? Who's linkin' to the out-of-date URL? (According to OpenLinkProfiler.org.)

Want to program that CD player to play Hits in their original order? Refer to the first column!

No endorsement of the sites listed here is expressed or implied.

The preferred URL for this page is https://pylon.pyrzqxgl.com/.